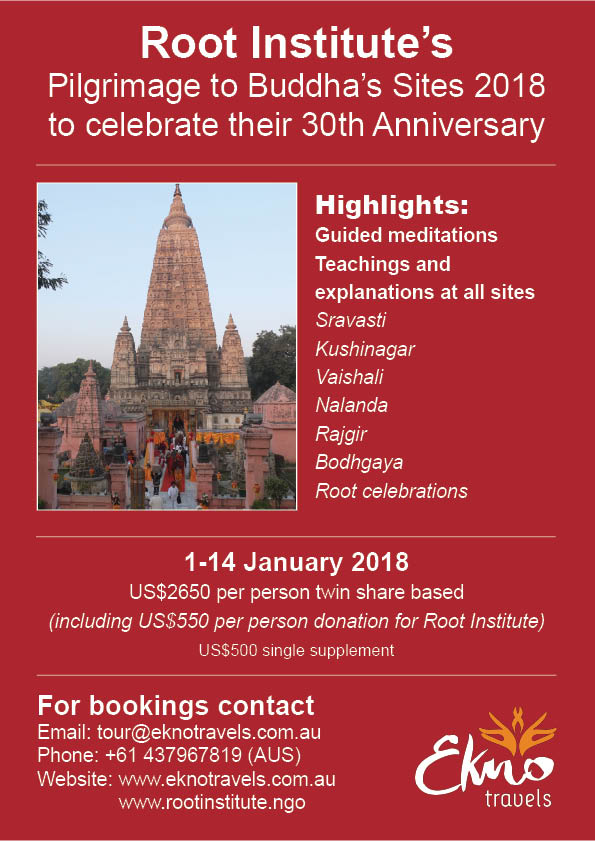 Dalai Lama on the value of Pilgrimages

Pilgrimages are a part of nearly every religion. The faithful set out in hopes of finding virtue and gaining merit. Among Buddhists, they visit places where a spiritual master once spent time meditating. His presence makes the place seem somehow blessed or charged, as if there is some kind of electricity around it. Pilgrims come to feel these mysterious vibrations. They try to share in the visions of the master. Along their road, they undertake hardship with no thought of material reward. Their every step, every movement, becomes filled with a sense of spiritual progress.

We Buddhists believe that merit is accumulated when you take part in something religious, with discipline and faith, because in doing so you shape a proper attitude within. With the right attitude, any journey to a sacred place becomes a pilgrimage. In our tradition, the Buddha advised that in times to come people interested in his teachings should be told about the places associated with the major events of his life. His purpose was not to ensure the aggrandizement of the person of the Buddha, but rather the welfare of his followers. We believe that expressing respect and admiration for the qualities of the Buddha—by making offerings or undertaking a pilgrimage—contributes to our own spiritual progress.

There is a strong nomadic strain in the Tibetans, which lends itself to the rigors of pilgrimage. Our land itself is a source of spiritual inspiration, not only because of the profusion of temples and monasteries, but because we regard even the physical features of the land as sacred. Mount Kailash in western Tibet is especially famous. Buddhists revere it as the sacred location of the meditational deity Chakrasamvara. For Hindus, it is the abode of the deities Shiva and Parvati. Jains and Sikhs have their own special associations with it. Even for those without a specific faith, the mountain’s physical form and color make it a natural symbol of purity.

For Tibetans, India is also a holy land. It was the birthplace of the founder of Buddhist culture and the source of the wisdom brought to our mountains hundreds of years ago by Indian saints and seers. My first opportunity to pay my respects there came in 1956, when I was invited to attend celebrations of the 2,500th anniversary of the Buddha’s birth. I was overjoyed. I was to have a chance to visit Bodhgaya, the place that, like every Buddhist, I associated with the highest achievements of the spiritual path, the Buddha’s attainment of perfect enlightenment.

When I finally stood in the presence of the seat of enlightenment, I was profoundly moved. Reflecting on Shakyamuni Buddha’s great accomplishment in this place, I also could not fail to remember his overwhelming kindness to all sentient beings. Not only did he achieve perfection himself, but also he revealed that each of us has the potential to do so, too. I believed then, as I do now, that the teachings of the Buddha could lead not only to inner peace in the lives of individuals, but also to peace between nations. At Bodhgaya, as at other Buddhist sites, I was also filled with admiration for the masterpieces of Indian religious art, expressions of creative genius and profound faith. I was reminded that sectarianism and communal conflict have in the past harmed this great heritage. Yet ultimately, India’s underlying spirit of tolerance and religious freedom has always restored peace and calm.

Essentially, all religions teach us to discipline and transform ourselves so that we can achieve inner peace and a kind heart. Yet today, in different parts of the world, we see the flames of conflict being fanned in the name of religion. People take up arms in the name of religion only because they are too narrow-minded to grasp the true meaning of their respective faiths.

I firmly believe we can take steps to help nurture understanding and harmony among religions, and thus promote peace and security. One of the important ways of doing this is to encourage contacts among the faiths, perhaps by visiting others’ places of pilgrimage. If possible, they can pray together; if not, they can just sit in silent meditation. Pilgrimages like this are an immensely valuable and deep experience.

It was in this spirit that, in 1993, I went to Jerusalem, a site holy to three of the world’s great religions. I went to the Wailing Wall with Jewish friends. I visited Christian places and prayed with Christian friends, and then I visited the Mount Rock, the holy place of our Muslim friends and prayed with them. I have also paid visits to various Hindu, Islamic, Jain and Sikh shrines and places holy to Zoroastrians both in India and abroad. Sometimes we prayed together and sometimes meditated together in silence.

More recently, I joined Christian and Buddhist leaders in a pilgrimage of prayers, meditation and dialogue at Bodhgaya. Each morning under the Bodhi Tree, we all sat together and meditated. Since the Buddha came more than 2,500 years ago, and since Jesus Christ came almost 2,000 years ago, I think that this was the first time such a meeting had taken place. (Source: Newsweek  April 23rd 2007, edited for Ekno Experience)