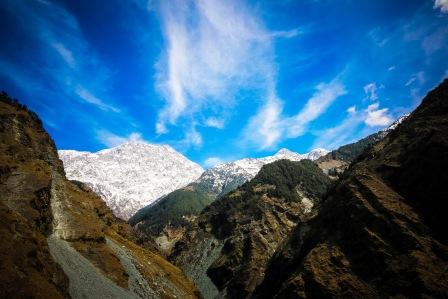 Did you know there is a place that is the complete opposite to all I have mentioned above?Green fields, snow-capped mountains, crystal clear streams and rivers.

Did you know that you can jump on a plane and leave the dust, heat and flies behind?

At the end of the last long hot summer, Ijumped on a plane in search of a piece of paradise –in a place that is the complete opposite to all I know.

Welcome to Dharamsala, India. Dharamsala is in Himachal Pradesh,northern India in the foothills of the Himalayas and is home to the Dalai Lama.

I love India. The colours, the chaos, the people, the energy.But I ama nature loving, country girl at heart so this is a 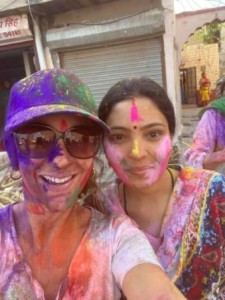 complete contradiction.My previous trips to India have involved busy places– Delhi, Mumbai, Varanasi, Agra, Jaipur and Udaipur. To be flying into Dharamsala was a new thing for me. And, wow! What a sight to behold, flying alongside the snow-capped mountains as we descended to Kangra, the local airport for Dharamsala. I am not sure what is considered an excessive use of a single word, but I think the word ‘wow’ made up half of my vocabulary during my four days exploring Dharamsala and its surrounds.

I live in rural Western Australia. It is flat, dry and very brown. The mountains of Himachal Pradesh arethe absolute opposite and it was completely overwhelming for me. I have seen snow and mountains (if you could call them that) twice in my life but nothing compared to the incredible sight of the mighty snow-capped Himalayas.

I arrived in March this year, and the weather was almost perfect. Cool enough to need a warm jacket, sunny enough to warm up if you were walking or exploring.

During the first part of my trip there was the ever-growing concern of COVID-19. The spread of the virus was starting to impact on the freedom to travel in India by the time I reached Dharamsala. I was lucky enough to be one step in front of each new COVID-19 enforced regulation so I still got to see most of the things I wanted to. Well, maybe half a step!

If it is spirituality you are seeking, Dharamsala might be the place for you. Home to the Dalai Lama, it is also home to the largest Tibetan temple outside Tibet. Dharamshala literally translates to ‘rest house for pilgrims’. Originally it was a small rest house near a temple,for anyone travelling on a pilgrimage who needed a place to rest up at along the way. To this day, nearly all temples in India have a dharamshala associated with it for people to use.

In the 1840s the British relocated their Gurkha Light Infantry to a position on the slopes of the Dhauladhur Hills, near the site of a Hindu dharamshala. From that time on the area became known as Dharamsala.

There are plenty of temples to visit–colourful, old, peaceful, big, small, intricate and ornate. There is also plenty of opportunity for spiritual enlightenment with the Dalai Lama having his home and monastery at the edge of town. The town exudes spirituality with the Dalai Lama’s fellow Tibetans swinging prayer wheels a constant presence in the town.

For me though, spiritual enlightenment is more nature based. The impacts of COVID-19 meant that any plans were 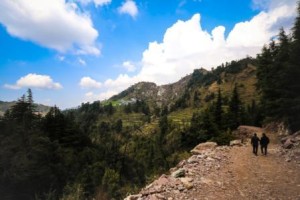 fast changing and day by day places were shutting down to visitors and crowds, with temples being the first to be hit.While discussing the shutdowns with my local guide Vikas, he said ‘But nature never shuts down, Danielle.’So my tour became a lot more nature based, which suited me fine!

My trip was now down to simple pleasures such as a nice relaxing walk up a winding mountain road, to find a coffee shop randomly tucked away in the middle of absolutely nowhere.Vikas, Kamlesh (my expert driver who safely navigated those narrow mountain roads) and I were the only people apart from a village man and his mulesand awoman walking up the narrow road. As we sat at the coffee shop I discovered that this little road was travelled by many peopleas they carriedtheir supplies further up the mountain to their homes tucked away on the sides of the mountains.

Far below the melted snow turns into streams and rivers that take on many formations. From raging and roaring rivers to just a tiny trickle, the water is always crystal clear and freezing cold. For a full sensory experience I took my shoes off and stood in the water. That was, by far, the coldest water experience I have ever had!I kept my shoes onthe next time asI thought of how cold the water would be. This was the incentive as I triedto be agile, like a mountain goat jumping from rock to rock in an attempt to not fall in.

Walking up a mountainside, sharing it with goats, donkeys and a handful of people, is not something you would generally associate with India. But as I walked up yet another mountainside (yes, lucky nature never shuts down, Vikas! And thanks COVID-19 for the itinerary changes!) I looked up and couldn’t help but think that the snow-capped mountain just in front of me might be the closest thing on earth to heaven and the gods. 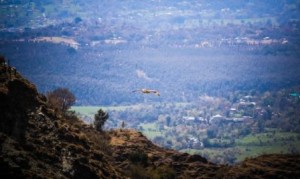 With Himalayan griffons soaring high between the mountain peaks, goats grazing atground level nearby, it was overwhelming: incredible and remarkably peaceful.

Everywhere we drove, walked and sat I could see snow capped mountains.From walking the streets of McLeod Ganj (which were now closed), to visiting temples and sitting on my hotel balcony, the mountains were omnipresent.

Only one word – ‘wow’can describe my four days exploring Dharamsala and its surrounds. I’m sure you get the picture.When the world opens up and we can travel again, make the opportunity to visit Himachal Pradesh.You will thank yourself and I can guarantee,the ‘wow’factor will be part of your experience.

Thanks to Danielle Harvey for her contribution (pictured in the sunglasses above).  She  travelled to Dharamsala, India  with Ekno Travels in March 2020. www.eknotravels.com.au