Travelling in winter is my thing. Last year I travelled to Denmark, Germany and the UK in March, which was mid-winter. It was the coldest winter for years with a record dumping of snow. I was very happy to a compete with a full range of thermal underwear and I borrowed a lovely, long winter coat which did not leave my back for the whole time I was away. I have vivid memories of waiting at Paddington Station in London while huge snowflakes drifted into the sitting area and wobbling through Bath after a massive snowfall.

So undeterred, I made plans for a short trip to experience winter in Japan and to make use of the efficient rail network. My sisterRobyn, decided to come along for the ride. She arrived the night before me, so we met at Narita Airport at the JR office to convert our vouchers to actual rail passes. Luckily my quick-thinking sister decided to line up rather than wait for me, as the line snaking out of the office was at least 50 metres long. By the time I got there at around 9am, she was not far from front, and we only had to wait for another 30 minutes.

Not knowing what to expect, we were surprised when the helpful person behind the counterasked if we would like to reserve any seats. Well yes, we did, and so we pulled out our itinerary. Tickets were issued quickly for the next 2 days and we were on our way on the train bound for the center of Tokyo before we knew it. This being Japan, we waited in a heated, glassed room within sight of the train. I am still amazed by such organisation. This is an indicator that I have travelled over too many winters in India where such luxuries don’t exist!In India the only equivalent is the first-classladies waiting room, with limited seats for an unlimited amount of people, so standing up out in the cold is usually the only option!

The train came and we jumped on, settling ourselves in for the 90-minute ride to Tokyo. The train ride from Narita is long, but you pass by quaint country side, full of small houses and manicured gardens. It gives you a taste of Japan straight up, nothing like immersion 101.

We were staying in the downtown area, not far from the Tokyo Tower. Armed with our detailed map and rail pass, we negotiated our way to our hotel, had a quick rest and then set off to see the sites. Our first temple sat under the tower, capturing the unique blend of old and new that Tokyo is famous for. The grounds of the temple are immaculate and sculptured, simple yet artistic at the same time. This also applies to the insides of the temples. It feels as though that the structures and gardens are simply there for support and the spiritual aspect is the most important.This differs from the elaborate gold temples in Thailand and the highly painted ones in Tibet and India.

We decided to head to the newer part of Tokyo, where the 21st century well and truly kicks in. Robyn wanted to buy a computer gadget for her teenage son, so we turned down a fairly narrow street only to discover an army of people, dressed against the cold, heads down on their phones. We could only imagine that it must have been a game that they were collectively playing.

The next day we headed to see Mt Fuji. I had only ever seen it from the train and I wanted to experience it closer.

Again using our rail passes, we headed towards Hakone and decided to go the tourist route. So, we took a train, bus and then a boat across the lake to see the mighty mountain, before taking a cable car to the best vantage point. We were not disappointed. It was majestic, sitting all alone on the horizon. The next mode of transport was small local train so that we could enjoy a quick onsen at a small local bathhouse, before getting back on the train bound for Tokyo. It was a Sunday, so we shared our experiences with lots of other domestic tourists all enjoying the day out of the city.

The next day we boarded the shinkansen bound for Yamanochi, where we were planning to stay at Shibu Onsen to visit the snow monkeys at Jigokudani Snow Monkey Park. There was a long walk through the frozen snow into the park and it was slippery in places but still and quiet, with the tall majestic trees lining the path as we walked about 2kms towards the entrance. The monkeys didn’t disappoint – playing, fighting, de-fleaing, and eyeballing each other around the various hot pools and somehow not concerned about the tourists. It was a crystal-clear day which made for good photographing.

We headed back to our lodgings determined to take part in the town ritual, which involves wearing a yukata (traditional robe) around the town while taking a bath at a few of the towns onsens. The ryokan provided us with the yukatas and Japanese thongs with socks. It was a quaint, quiet little town where you felt transported back in time and was also an excellent place to have the complete Japanese onsen experience.We slept on a tatami mat that night which I found quite comfortable and warm. Just before leaving we were walking around town for the last time and found my rail pass sitting up on someone’s mailbox – Robyn commenting that looked like mine. Sure enough, I had dropped it in haste the previous evening trying to get back to our lodgings to get more money to pay for our dinner bill!

Our next stop was Takayama, a smallish town in the centre of Japan, famous for its spring and autumn festivals, dating back to the mid-1600s. The narrow streets of the historic district are lined with wooden merchant’s houses dating to the Edo Period, along with many small museums.We decided to lash out and stay in a central hotel walking distance from the historic district so that we could wander its famous streets and sample its famous Hida beef.

The next day we headed higher into the mountainous region of Gifu, heading to Shirakawa-Go. The famed thatch- 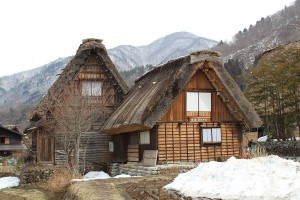 roof village is a UNESCO World Heritage Site nestled amongst the mountains and didn’t disappoint us. With snow still on the ground, and smoke billowing from blazing fires, it was one of the prettiest, quaintest villages I have ever been to (maybe the coldest also). My sisterRobyn fell in love with this place, it was an easy place to love.

Next it was time to head to Kyoto. We had to take stock of the Kyoto train system, which we were told even locals have problems with. We managed to find our hotel and headed to the Fushimi-Inari Taisha. When we arrived we entered a world of vermillion torii (Shinto shrine gates), with the endless red torii gates weaving up and down the slopes. It is a beautiful thing to walk through them on the cobbled stones. It is a shared experience with lots of other tourists (some 50 million visit Kyoto each year) but it still felt special. We didn’t make it to the top but were rewarded half way with views of the city.

The next day rain was predicted, and it was quite heavy when we left the hotel.Our first stop was the Sagano Bamboo 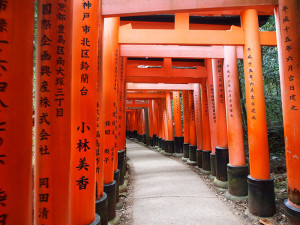 Forest. Its small windy paths flanked by tall bamboo on either side created an atmosphere that felt calm and peaceful despite the rain.We then headed to the picturesque Maruyama-koen Park and continued to the Yasaka-jina Shrine, full of young women dressed up in Kimonos taking selfies. The rain was persistent,so we took stock in a café to dry off, only to find we were right beside the Kimono Forest, an art installation with 600 backlit pillars adorned with vibrant kimono textiles. It was simply stunning, and I made a mental note to visit it at night next time.

Next was the Gion district,with its beautifully kept narrow lanes. We were secretly on the lookout for Geishas and were in luck, as we were at the right place at the right time to see the Geishas leaving their residences and heading for work in big black taxis.The drivers were immaculately dressed and acted as a barrier for the Geishas getting into their cars by shielding them from the cameras. I recently read an article which said that Geishas have become a target of tourists mobbing them wanting selfies which has made them more reluctant to move freely around as they have done in the past. We did see one Geisha who was indeed hurrying down the street to her destination. The rest had the shelter of those big black taxis. It was still special and felt as if we were star watching.

On our last day in Japan we got up early to visit the famous Philosopher’s Way, a short bus ride from our hotel. After

enjoying our morning, we got the shinkansen back to Tokyo for our flight home.

It was a short trip, one with many highlights. Japan has the distinct advantage of having all four seasons, and winter is one of them to be enjoyed. I certainly recommend travelling then, as long as you have warm clothes, a good coat and a light bag. Next winter here I come!

Put the meaning into your travels – travelling for fulfillment

If you want something more from your travels, take a look at one of our meaningful and transformative journeys. These trips are spiritual, cultural and educational in nature and are all led by one of our qualified tour leaders. These tours take in sacred Buddhist pilgrimage sites and bespoke cultural highlights of India, Japan and Australia. Our experience and understanding of these destinations is what allows you to sit back, relax and enjoy your travels on a whole new level.

So why not explore our series of Mindful Journeys on the road less travelled?  https://eknotravels.com/tour-category/buddhist-pilgrimages/

“We wander for distraction, but we travel for fulfillment.” Hilaire Belloc