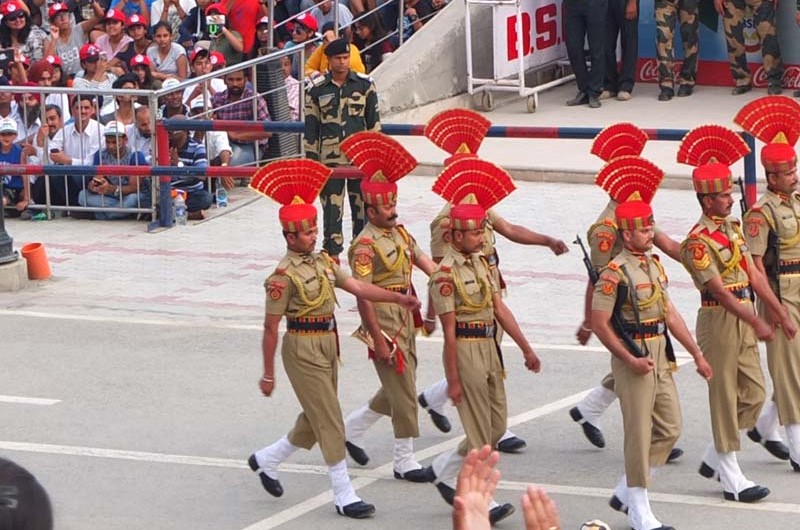 We arrive in Amritsar and to blistering heat.  After a long relaxed lunch and a planned siesta, we were told by our hosts at the home stay to hit the road early for the Beating Retreat Border Ceremony of India and Pakistan at Attari- Wagah. He has had reports of hoards of people and we may not get to see it if we delay.

So mid afternoon, in the heat,  we hit the road heading west to the border.  As predicted the traffic was heavy, there were masses of people.  Mostly domestic tourists, school children and a few foreigners all coming to patriotism at its best (Indian style).  Loud music, children, women, men running  up and back in the middle of the road with an outsized Indian flag, Bollywood dancing, a Compare (or Master of Ceremonies) giving the crowd instructions either through addressing them directly with his microphone and through a series of mimes when he wanted to crowd to cheer.   He was dressed in white clothes as if he were some sports trainer.  The people, lots of people came looking for a good show.  And it was! 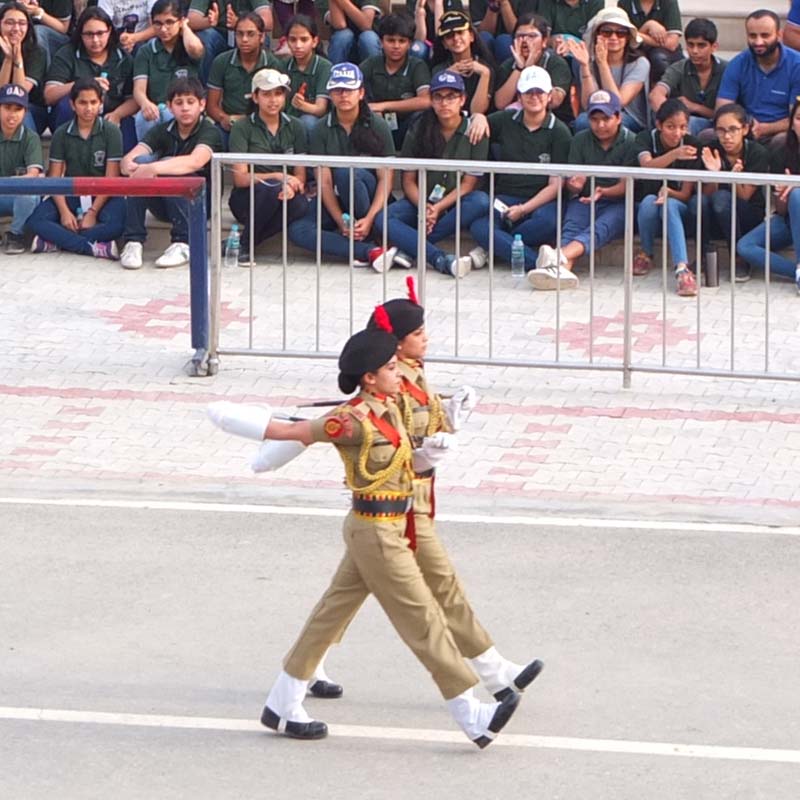 The border guards – men (and 2 token women to lead the group) doing a version of sand crabs walking, tilting their hats (not sure if that was part of it or they were just uncomfortable)…whatever they were doing it had a magnetic effect on the crowd.  They loved it, shouting Hindustan Zindabad (long live India) and Ji Mata Di (hail to the Goddess – used in the Hindu religion).   Having the tallest men in India looking fierce, brave and protecting the nations’ borders is an absolute recipe for success.

As we sat near the Pakistani end, the men protecting their border were fiercer looking in their black commando style outfits, beards and dark complexions.  The people on the Pakistani border side were quiet and it was only half full.   I somehow felt we got a better deal on the Indian side, or perhaps the Indians simply love drama more than the Pakistanis.

The finale is the lowering of the flags on each side while a fierce soldier stands at attention on each side of the gate and it was all over.  The border was closed; the main stars (the tall Police) took protection behind security gates so they wouldn’t get mobbed. We left, along with everyone else for the drive back to Amritsar.

Sharon Thrupp
Sharon is passionate about India and the Himalayan region. She believes that while her Australia is her country by birth, India is the country of her heart. She first went to India in 1996 and later returned to volunteer helping Tibetans in Dharamsala in 2001, fell in love with the Himalayas and stayed. She is currently involved in a NGO in India helping underprivileged girls continue their education and spends her spare time walking in the foothills of the Himalayas and doing yoga.
Previous postHappy Holi 2017
Next postGolden Temple Amritsar, India – selflessly serving the masses